For Writing IELTS Task 1 essays, you are required to describe the detail in a chart, graph, table, map or diagram, most especially, to record changes in data.

To do this, you will need to use particular sentence structures and these are one of the things we’ll be learning about in this lesson.

We’ll also be looking at common Task 1 verb tenses and other elements of grammar that frequently cause problems for students.

Here's an overview of the lesson:

The choice of which tense to use will be determined by whether or not the graphic contains dates and, if it does, whether the dates are in the past or the future.


The tenses you are most likely to need are:

– Past tense – past simple

The table below gives explanations of these verb tenses and examples from Task 1 essays. 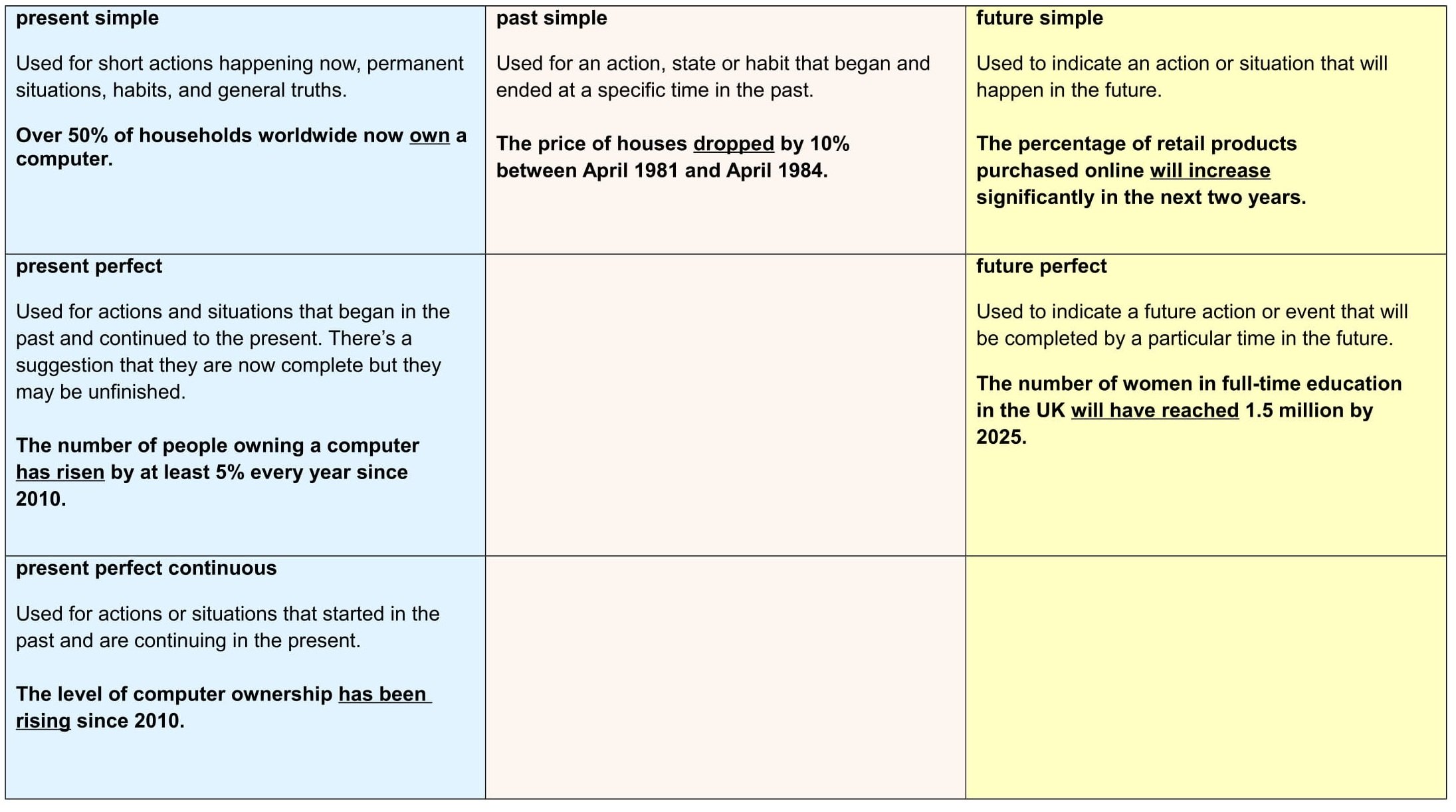 Most graphics will require you to compare data from two or more time periods, for example, past and present or present and future predictions, so you will need to use a range of different tenses in your essay, as appropriate.

The key word in the sentence above is ‘appropriate’. Whilst you will gain marks for using a good range of tenses in your Writing IELTS Task 1 essay, you should never do so just to show that you know many different tenses. Only use the tense that is 100% correct for expressing a specific piece of information. It is accuracy that the examiner is looking for.

The first two steps of writing a great Academic Task 1 essay are to:

I cover these tasks in detail in the lesson on How To Understand & Analyse Task 1 Questions.

Once you’ve done this, you'll understand what you’re required write about. It will be one or more of these things:

There are specific sentence structures that you can use for each and these are what we’re going to look at next.

How to Describe Trends

The two most useful grammatical structures for describing trends are:

There was a dramatic improvement in the percentage of people in employment.

How to Describe Increases and Decreases

The two most useful grammatical structures for describing increases and decreases are:

There was a fluctuation in university applications.

There is now a swimming pool in the location of the old factory.

How to Make Comparisons

These words can be used to form many different sentence structures useful for making comparisons, such as.

The most common childhood illness in 1979 was chickenpox.

Cruises were more popular than beach holidays in 2012.

A lower number of teenagers play a sport than play computer games.

The largest proportion of immigrants came from Mexico.

These sentence structures are valuable tools for getting high marks for your Writing IELTS Task 1 essay, so practice using them.

For many students, two aspects of grammar that are a particular problem are:

There are two specific prepositions that you will probably use numerous times in your Task 1 essay when reporting change – ‘in’ and ‘of’. They are easy to get wrong.

‘Of’ is also used after a value. You will probably want to use proportional values in your Task 1 essay so here are some examples.

Another preposition to learn is ‘between’ which you will need to make comparisons. For example,

Many languages do not have articles, and native speakers of those languages can find it a huge challenge to remember to use them.

In English, there are three articles – the, a, and an. Each is used in specific instances.

1) With singular and plural nouns:

There was an upward trend in families taking an annual holiday abroad after 1990.

Also, use a/an before adjective singular noun combinations such as these from our preposition list:

The key to improving your grammar is to know your weaknesses and focus on these as you practice and when you check your work in the exam.

Want to watch and listen to this lesson on Writing IELTS Task 1?

How To Plan a Task 1 Essay – Discover 3 reasons why you must plan, the 4 simple steps of essay planning and learn a simple 4 part essay structure.

Click the links below for a step-by-step lesson on each type of Task 1 question. 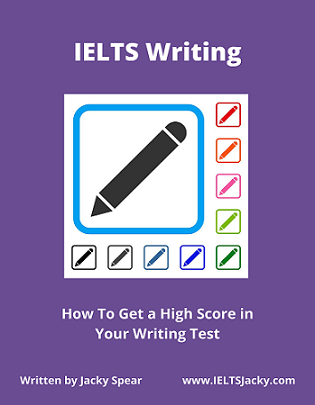