How to fight desertification and drought at home and away 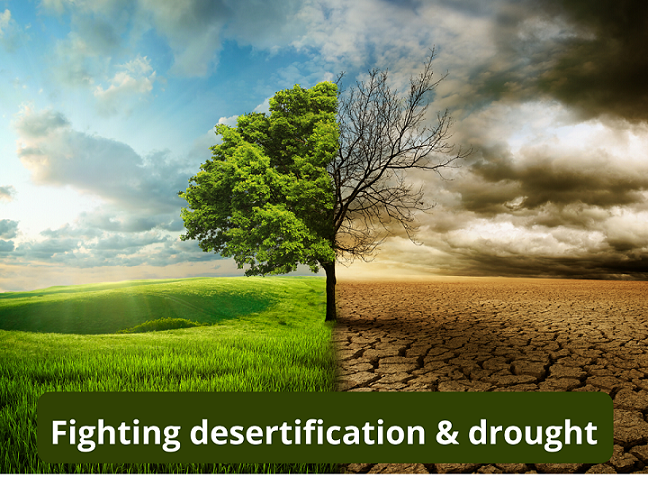 1.  What does desertification mean?

A  The process by which desert areas expand.

B  The process by which sand dunes encroach on agricultural land.

C  The process by which fertile land becomes increasingly degraded due to climatechange and human activity.

2.  Why may Canada have left the Convention to Combat Desertification?

A  Because of a disagreement over policies.

B  Because it felt that membership was too expensive?

C  Because it felt that the cost outweighed potential environmental benefits.

3.  What was created through the establishment of NACSP?

A  A scheme to predict how drought would affect a given area.

B  A scheme to predict when drought was likely to occur.

C  A scheme to predict the likelihood of wildfires.

4.  Why is it important to protect natural vegetation?

A  Because it helps to prevent the loss of carbon from the soil.

B  Because it helps to prevent flooding.

C  Because it helps to prevent erosion.

How to fight desertification and drought at home and away

A growing human population and runaway consumption are putting unsustainable pressures on the natural resources we depend on for survival. Our misuse and abuse of land and water is changing fertile land into deserts.

The word “desertification” conjures up images of the spread of existing deserts, with tall dunes spilling into villages and farmer’s fields. But it is actually a term that describes the way land can be transformed by climate variation and human activities, including deforestation, overgrazing (which causes erosion), the cultivation of unsuitable land and other poor land-use management decisions. We see this now in southern Africa, which has already lost at least 25 per cent of its soil fertility. But not only developing countries are at risk. Almost 1 billion tonnes of soil is lost every year because of erosion resulting from poor land management in Europe alone. Desertification is one of the biggest environmental problems facing humanity and has already affected over 40 per cent of the world’s population of 3.2 billion people.

Given that climate change could cause more frequent droughts and that population growth puts more pressure on natural resources, land degradation is an increasing global threat to food security, a contributor to poverty and a barrier to achieving the United Nation’s Sustainable Development Goals. It is clear that desertification is a problem of global proportions, requiring a unified strategy among all countries. If action is not taken now, desertification will accelerate, resulting in further migration and conflict.

Not all areas are equally at risk of desertification. Drylands, like those in the Karoo of South Africa and the prairies of Canada, are regions where evapotranspiration (the transfer of water from land and plants to the atmosphere) far exceeds precipitation. Under natural conditions, drylands are characterised by slow cycles of changing climate and vegetation, moving from one stable state to another. More frequent and severe droughts and human disturbances, such as agriculture, grazing and fire, cause more abrupt shifts that can be irreversible.

The threat of land degradation is so widely recognized that the UN established the Convention to Combat Desertification (UNCCD) nearly 25 years ago, in 1994. It is a legally binding agreement between the partner nations to work together to achieve sustainable land management. All member countries of the UNCCD recently agreed to fight desertification and restore degraded land by 2030. On June 17, Ecuador hosted the World Day to Combat Desertification, under the slogan “Land has true value – Invest in it,” and used the occasion to showcase the use of sustainable land management in developing the country’s bio-economy.

Despite its initial commitment to combat desertification, Canada withdrew from the UNCCD in 2013. The reasons were unclear, but it may have been because membership was seen as too costly, without obvious benefits for the environment. The departure left Canada as the only country not party to the agreement. However, Canada rejoined last year, acknowledging the link between desertification and many of Canada’s development priorities. The factors driving land degradation are interconnected and include population growth and migration, climate change and biodiversity loss.

Current rates of global land degradation are in the order of 12 million hectares per year. And yet food production must increase by up to 70 per cent by 2050 to feed the projected global population of 9.1 billion people. Current land-management practices are clearly unsustainable. The threatened area is so large that halting land degradation and scaling up solutions, from farms and villages to watersheds and continents, requires globally coordinated solutions. By rejoining the UNCCD, Canada can take its rightful place within a coordinated global effort to combat desertification and strengthen its own efforts nationally.

Canada has already cooperated on a regional level with other countries to combat drought and minimise the impacts of reduced agricultural productivity, wildfires and water shortages. In 2016, for example, when droughts hounded North America, burning Fort McMurray, Alberta and adding to California’s long-running water shortage, Canada cooperated with the United States and Mexico to minimise their impacts. The resulting North American Climate Services Partnership (NACSP) facilitated an early drought forecasting system and drought impact assessments.

In addition, Canada faces its own land degradation challenges. Most people associate dryland regions with a hot and dry climate. However, large parts of the Canadian Prairie provinces – Alberta, Saskatchewan and Manitoba – can be classified as drylands. They are also enormously important agricultural areas, accounting for 60 per cent of the cropland and 80 per cent of the rangeland in Canada. The Prairies expect to see longer and more intense periods of drought interspersed with major flooding with future climate change. And although North America is one of five regions identified by the UN as facing relatively fewer challenges related to land compared to the countries most at risk, the region does face significant water stress challenges. The Paris Agreement recognized “safeguarding food security” as an important priority for climate change adaptation, which goes hand-in-hand with combating desertification.

The agricultural sector will play an important role in mitigating the impacts of climate change and fighting land degradation. It can protect against drought, flooding, landslides and erosion while maintaining natural vegetation, which helps store carbon in the soil. But agricultural production will also have to become more efficient. It will need to adapt to periods of lower water availability and take measures to preserve fertile soil. We must also look to how we manage our water resources to help agriculture adapt to climate change and stop desertification.

The University of Saskatchewan is currently developing tools that can be used by government and in research to predict and manage the water flow and water quality of Canada’s large river basins. This will allow water to be managed at the scale of entire river basins and help determine how industry, agriculture and mining can fairly share this limited resource.

Canada has, for now, recognized the link between desertification and many of its development priorities, including agriculture, security, water and renewable energy. But we need to ensure the Canadian government remains committed to combating drought and desertification here and in the rest of the world.

1C  The process by which fertile land becomes increasingly degraded due to climate change and human activity.

2 C  Because it felt that the cost outweighed potential environmental benefits.

3B  A scheme to predict when drought is likely to occur.

4A  Because it helps to prevent the loss of carbon from the soil.

To learn How to Answer Multiple Choice Questions, click this link.